Installed above visitors’ heads, two rectangular mirrors intersect at a right angle and rotate slowly around a central axis. The gradual movement provides the viewer with alternating perspectives of the space as they are constantly juxtaposed within the mirrored surfaces. The right angle causes a duplicate reflection, as both mirrors reflect not only the space but also each other, creating the disorienting effect that the spectators and objects are rotating along with the mirrors. Although the viewers remain standing, their reflections gradually turn from upside-down to rightside-up. This illusion induces not only a vague feeling of dizziness but also a latent distrust of one’s own eyes and spatial perception. 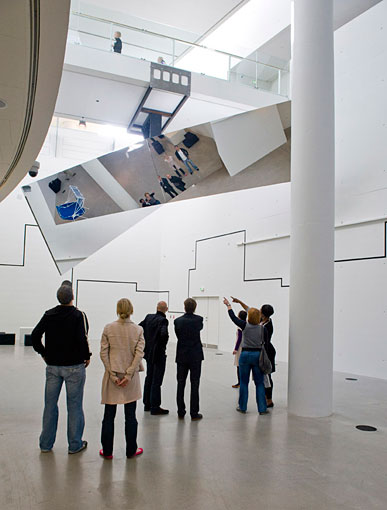