In 360° Presence, a rough steel ball 70 cm in diameter starts moving when a visitor enters the space where the work is installed. A sensor within the space detects physical presence and keeps the ball in motion, constantly roaming the room as a violent manifestation. Due to the largeness and weight of the ball, it creates a sense of hostility as it bumps into or slides along the walls, destroying parts of their surface and installations such as electrical sockets. After a short time, it creates a black horizontal line throughout the space on the level where it touches the wall. The visitor seems to have no control over or effect on the movement or direction of the ball, and is thus left without possibility to stop the aggression imposed on the space and himself. On the contrary, it is the visitor’s presence that makes the ball move around and destroy the white cube. Only when the viewer leaves the room does the ball cease its movement. 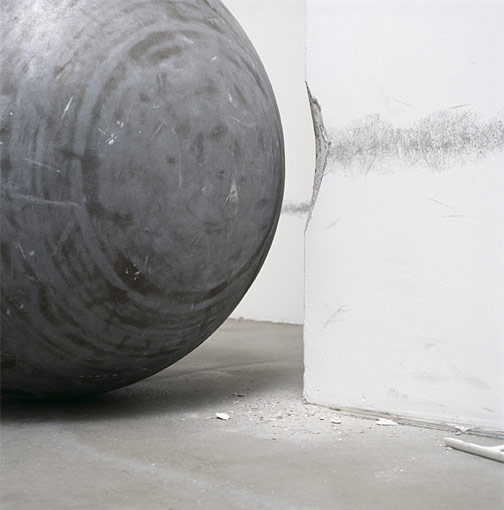